How to Pay Wages

A+ A-
Print Email
Flock of Sheep and Wages
https://www.al-islam.org/anecdotes-reflection-part-1-sayyid-ali-akbar-sadaaqat/3sincerity#1-three-persons-cave

Three Persons in a Cave; The Holy Prophet (s.a.w.) has related: “Three persons from the tribe of Bani Israel got together and started out on a journey. On the way, clouds gathered above them and it started to pour with rain and so they sought shelter in a nearby cave. Suddenly, a large boulder slipped and blocked the entrance to the cave, trapping the three inside and transforming the day into a dark night for them. They had no other alternative except to turn to God for help. “Let us use our sincere deeds as a means to obtain deliverance (the action of being rescued or set free) from this predicament (a difficult, unpleasant, or embarrassing situation),” suggested one of them. All the others agreed with the suggestion. ..... The third person supplicated, “O’ Knower of every hidden and manifest (clear or obvious to the eye or mind)! You know Yourself that I had a worker who used to work for me. When his term had reached its termination, I handed over to him his wages, but he was not pleased and desired more and, in a state of dissatisfaction and displeasure, he went away. I used his wage to purchase a sheep, which I looked after separately and very soon I had a flock in my possession. After a period of time,the worker again approached me for his wage and I pointed towards the flock of sheep. Initially, he thought I was ridiculing him, but later, realizing my seriousness, took the entire flock and left. O’ Lord! If this act had been prompted by sincerity and had only been for Your pleasure, deliver us from this quandary (a state of uncertainty or difficult situation).” At this point the entire boulder moved aside from the mouth of the cave and all three emerged from it, joyous and ecstatic, and continued their journey. 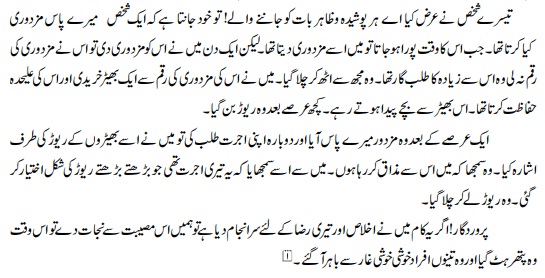 Posted by All Solutions Team
Labels: How to Pay Wages