Why Momin See Each Other

You are Allah's servants, who are ordered to carry out His commands for what is obligatory and what is forbidden, and you are the carriers of the burden of Allah's Religion and Revelations, and you are entrusted with the trusteeship of yourselves. You are charged with the propagation of Allah's Message to all the people of the world. 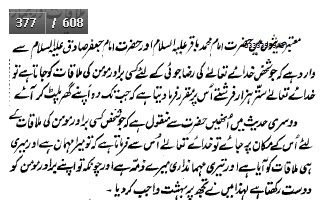 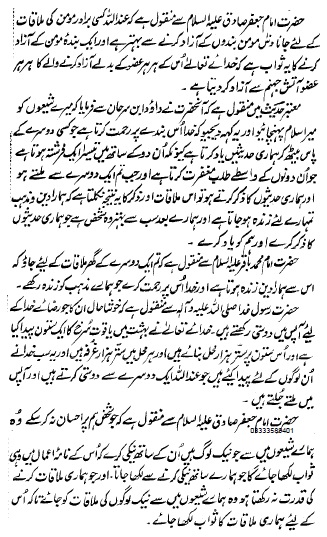 Visits to momineen and looking after the sick:
Reliable traditions from Imam Mohammed Baqir (a.s.) and Imam Ja'far- e-Sadiq (a.s.) state that a person who visits a fellow-momin in the name of God, God appoints seventy thousand angels, who go on announcing that he is fortunate and heaven is reserved for him, all the time, till he returns home.
According to a reliable tradition from the Holy Prophet (s.a.w.a.) Jibrael revealed unto him that Almighty God had sent an angel on the earth. This angel reached near a person who was standing in front of a door of a house and was asking the permission of the owner of the house to enter. The angel asked the person about the work he had with the owner oof the house. The man outside the door replied that the owner of the house was a muslim brother of his, and he, Abdullah (servant of God), had turned up on a visit to him. Then the angel questioned if the sole purpose of the man was a visit and nothing else besides it. The man replied that he had come on no other purpose except a friendly visit. The angel then revealed unto the man that God had sent him to the earth to salute on behalf of Him and the Almighty
God has made Heaven obligatory on him and has stated that a muslim visiting a fellow-muslim is just like visiting God and He is responsible for its reward which is heaven.
The Holy Prophet (s.a.w.a.) has said that happy are those who are friends with each other for the sake of God, for Almighty God has laid a foundation pillar of red yakut in heaven and has constructed seventy thousand palaces over it and every palace contains seventy thousand chambers (resting places) and all these have been made for those lucky beings who are friends with each other in the name of the Almighty God.
According to Imam Ja'far-e-Sadiq (a.s.), a person who cannot serve Ale- Mohammed i.e. the family of the Prophet (s.a.w.a.), should oblige those people who are pious Shias (friends). That person will receive the same reward which is meant for those who can oblige Ale-Mohammed. And those people who possess no power to meet the Imams should pay a visit to Shias (friends of Ahlul bait) and they will be rewarded likewise.
Another tradition coming from Imam Ja'far-e-Sadiq (a.s.) states that if a person pays a visit to a sick muslim then he will be attended by seventy thousand angels till the evening if he visits in the moning; and till dawn if he visits at dusk. These seventy thousand angels will recite durood on him all that time.
A tradition in this context also states that if a person pays a visit to a sick person then God sends seventy thousand angels to reside in his house till the Day of Judgement and pray to God all the time, half the reward of which will be recorded with the person.
A reliable tradition from Imam Moosa Kazim (a.s.) states that a person, when he is ill should allow people to visit him as the prayers of these visitors will be heard.
A tradition from Imam Ja'far-e-Sadiq (a.s.) states that when a person pays a visit to a sick man, he should ask the sick man to pray for him as the prayers of a sick man are equal to the prayers of the angels.
The Imam (a.s.) has also stated in another tradition that one need not pay a visit to a sick person when he is suffering from eye diseases. But in other types of illness, a person should visit a sick person constantly for three days and then on alternate days. If the illness seems to prolonng, then the sick person should be left alone with his family and one should not visit too often.
A momin who visits a fellow-momin when he is ill, is surrounded by angels who tell him, "O congratulations to thee on the heaven", and it is reported that the momin has said that alleviating a single suffering of any momin is better than I'tekaf (retirement for God's worship) and continued fasting for two auspicious months.
According to Hazrat Ali (a.s.), that man is rewarded more who pays a short visit to the sick and not a lengthy one unless the patient desires him to stay back and requests him to wait longer (and the doctor has permitted).
Another tradition states that when one pays a visit to the sick, then he should take with him apples, behi, turanj or any fragrance or food (incense) as an offering.
https://archive.org/stream/tahzeeb_ul_islam_islamic_ettiquettes/tahzeeb_ul_islam_islamic_ettiquettes_djvu.txt

Posted by All Solutions Team
Labels: Why Momin See Each Other