A Tunisian lawmaker has torn up Israel’s flag
http://www.presstv.com/Detail/2018/02/14/552314/Tunisia-Israel-flag-Parliament

“This year, the participation of people will be more vigorous than ever and everyone will take part, God willing.”
http://www.presstv.com/Detail/2018/02/08/551667/Iran-leader-enemy

"Helping an Indian prisoner -- Hamid Ansari -- in Pakistan has cost us dearly. My sister is missing and my younger brother (Saddam) who was deeply attached to her hanged himself after losing hope to get reunited with her," Salman Latif, Shahzadi's brother, had told PTI.
https://www.ndtv.com/world-news/missing-pak-journalist-zeenat-shahzadi-fighting-for-jailed-indian-hamid-ansari-found-after-2-years-1765261

Angry at Iran’s Victories and Their Own Defeats is the Reason for America’s Enmity with Iran
http://english.khamenei.ir/service/Speeches

Each day, more than 140 Americans are dying of drug overdoses across the country, reports show. In 2015 alone, approximately 35,000 people died of heroin or opioid overdoses, according to the National Institute on Drug Abuse.
Drug Addiction
http://presstv.ir/Detail/2017/08/09/531172/US-Donald-Trump-opioid-crisis 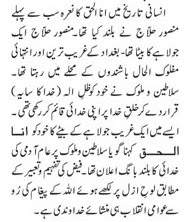 Mansur Al-Hallaj was the first who claimed "I am the Truth" (Ana 'l-Ḥaqq), in human history. Abbasid court executed him. Hallaj means "cotton-carder" was son of poor and was living in a poor neighbourhood. Kings declared themselves as 'God's Reflection'. Kings used to oppress people with this title. "I am the Truth" (Ana 'l-Ḥaqq), by Mansur Al-Hallaj, was a protest and a try to portray the real face of kings. Kings and their supporting circles's hypocrisies are not new. But Almighty has His own way to get introduce his system. 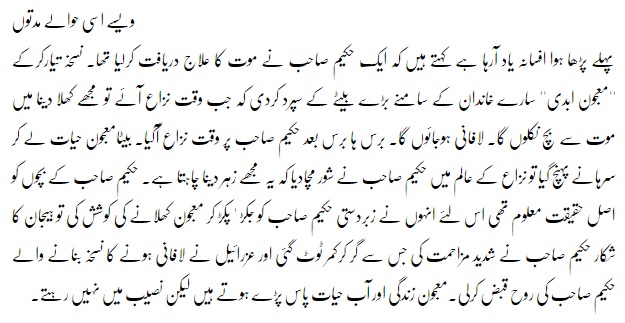 When Almighty decides to implement His Decree, then all false, self proclaimed 'God's Reflection' hypocrite Kings, their intellectuals and their supporting circles go astray and His Decree works as it worked to deal fire of Namrud (a place in Turkey). This group of hypocrites is preparing themselves for disgraceful end (death).

Faisala tera teray hathon mein hai, dil ya shikam
Free heart lends kingly state, to belly death is due:
Decide which of the two is better in your view.

Apne Razzaq Ko Na Pehchane To Mohtaj-E-Mulook
Aur Pehchane To Tera Gada Dara-O-Jamm
If man denies his God, on kings he has to fawn:
By trust in God, the kings to his door are drawn.

In this extensive poem, Allama Iqbal, critically talked about Maverick (Aflatoon) and especially Hafiz. So the proclaimed followers of Hafiz, created a storming situation. When this issue prolonged, and Allam's father asked Allama about the reality. Then Allama told his father, 'I have not criticised Hafiz's personality. I have just explained one concept. I'm so sad. My country people have become so prejudice that they are not able to distinguish between life water and lethal poison'.


Allama's father said, 'The explanation of concept without hurting the followers of Hafiz would be better'. Allama replied, 'Prejudice in the name of Hafiz is not less than idol worship'. Then Allama's father said, 'Allah SWT and His Prophet PBUH has recommended avoiding to bad naming the Gods of Non Muslims'.
Poisoned Society
http://iqbalurdu.blogspot.ca/2011/04/asrar-e-khudi-00-asrar-e-khuditamheed.html