Each Chapter has 5 stories

Sheikh Kashif al-Ghita was one of those illustrious scholars who were known to possess a high degree of forbearance.

One day, the Sheikh distributed some money amongst the impoverished people of the city of Isfahan after which he began to lead the congregational prayers. Between the two prayers, when the people were engaged in reciting their supplications, a poor sayyid entered the mosque, stood before the Sheikh and shouted rudely: “O’ Sheikh! Hand over the money of my grandfather (khums) to me.”

“You have arrived late; unfortunately, I have nothing left with me,” the Sheikh replied.

The sayyid, with great impertinence, spat on his beard!

Instead of reacting violently, the Sheikh spread out his cloak and began to walk amidst the rows of people, saying, “Whoever loves and respects the Sheikh’s beard, should help this sayyid.” The people, having witnessed what had transpired between the two, immediately obeyed and very soon the Sheikh’s cloak was filled with money. He handed all the money to the sayyid and proceeded to lead the congregation for the ‘Asr prayers.

Ibn Abbas narrates: “Once, three hundred gold coins were gifted to the Noble Prophet (s.a.w) which he in turn gifted to the Commander of the Faithfuls(a.s). As the Imam (a.s) took them, he declared: “By Allah! I shall surely give this amount in charity in a manner such that it shall be accepted by Allah.”

Later, Imam ‘Ali (a.s) narrates: “That night, after having offered the 'Isha prayer, I picked up one hundred gold coins and came out of the mosque. As I did so, I happened to encounter a woman and so handed over the money to her. In the morning the people were found to be talking amongst themselves, saying: “Last night ‘Ali (a.s) gave a hundred gold coins in charity to an adulteress.” I was greatly distressed to hear this.

The following night, after the 'Isha prayer, I picked up another hundred gold coins and came out of the mosque saying to myself: “By Allah! Tonight I shall give this in charity such that Allah shall accept this act from me.

As I emerged from the mosque, I found myself face to face with a man and handed over the money to him.”

At daybreak the talk amongst the inhabitants of Madinah was: “‘Ali (a.s) has given a hundred gold coins to a thief, and I became immensely despondent.”

The third night I picked up another hundred gold coins and said to myself: “By Allah! I shall surely give these hundred gold coins in charity to such a person, that Allah shall accept my charity.
After the 'Isha prayer, coming out of the mosque, I ran into a man and handed him the money. In the morning, the people of Madinah were found saying: “Last night ‘Ali (a.s) gave a hundred gold coins to a rich and wealthy person.”

I was extremely pained to hear this and so, approaching the Noble Prophet (s.a.w), I informed him of the incidents that had taken place.

Having heard me, he (s.a.w) said: “O' ‘Ali! Jibrail says: “Allah, the Exalted, has accepted your charities and considers them to be pure. (As for) the hundred gold coins that you had given to the immoral lady on the first night - returning home she turned to Allah in repentance over her past misdeeds and mended her ways. She has set aside the gold coins as her capital and is on the lookout for a husband.

The hundred gold coins of the second night had reached a thief who, upon reaching home, repented over his wrong-doings and utilized the amount for engaging in trade.

The hundred gold coins of the third night had reached the hands of a wealthy person, who had not been paying his zakat for years. Reaching home he began to censure himself saying: “How lowly and base can you be? While you have been violating Allah's ruling and not been paying the obligatory zakat for several years, ‘Ali Ibn Abi Talib, despite not possessing anything, has given you a hundred gold coins.” Having rebuked himself, he then calculated his unpaid zakat of several years and disbursed it.”

It was due to this act on the part of Imam ‘Ali (a.s) that Allah revealed the following verse in his (a.s) excellence:

“Men whom neither merchandise nor selling diverts from the remembrance of Allah and the keeping up of prayer and the giving of poor-rate; they fear a day in which the hearts and eyes shall turn about. 24:37”

67/3 - Satan in the Company of Those Using Foul Language

One day the Holy Prophet (peace be upon him and his holy progeny) and Abu Bakr were seated together when a person came up to Abu Bakr and began abusing and reviling him.

When the person had finished his outburst Abu Bakr, for the sake of defending himself, spoke out and in the process began to abuse the person.

The moment Abu Bakr began using foul language, the Holy Prophet (peace be upon him and his holy progeny), who till then had remained a mute spectator to the incident, suddenly got up from his place in order to distance himself from him.

As he (peace be upon him and his holy progeny) moved away, he commented: O’ Abu Bakr! When that person was abusing you, an angel of God, was answering the person in your defense, but the moment you began abusing him, that angel left you and his place was taken over by the Shaitaan; and I am not of the persons, who would sit in a gathering in which the Shaitaan is present.

71/5) Napoleon: Once Napoleon, while reflecting upon the Muslims, asked: Where is their main center? He was informed that it was Egypt.

When he traveled to Egypt together with a translator and entered its library; when the translator opened the Qur'an, the following verse appeared before him:

On the third day, when the translator had translated a portion of the Qur'an for him, Napoleon sought to know more about this book. The translator explained: They (the Muslims) believe that God has revealed the Qur'an upon the final Prophet Muhammad (peace be upon him and his holy progeny); this is their book of guidance till the Day of Judgment.

When he heard this, Napoleon remarked: What I have concluded from this book is that firstly, if the Muslims act upon the comprehensive and extensive teachings of this book, they shall never face humiliation and ignominy; secondly, till the time the Qur'an continues to play a role in their lives, the Muslims shall never submit before us, Westerners, except if we were to bring about a separation between them and the Qur'an. 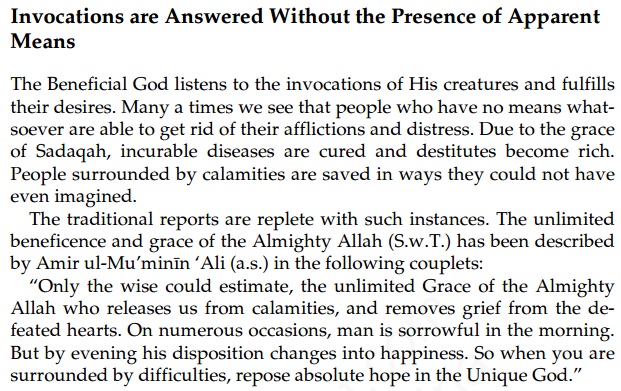 Posted by All Solutions Team