Verily, God and His angels bless the Prophet: [hence,] O you who have attained to faith, bless him and give yourselves up [to his guidance] in utter self-surrender!

Al-Furqan (The Criterion)> [25:63]
وَعِبَادُ الرَّحْمَنِ الَّذِينَ يَمْشُونَ عَلَى الْأَرْضِ هَوْنًا وَإِذَا خَاطَبَهُمُ الْجَاهِلُونَ قَالُوا سَلَامًا
For, [true] servants of the Most Gracious are [only] they who walk gently on earth, and who, whenever the foolish address them, reply with [words of] peace; 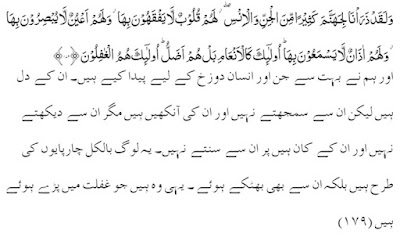 Or do you think that most of them hear or understand? They are only like cattle; nay,— they are even farther astray from the Path. (i.e. even worst than cattle).

Al-Muddaththir (The One Enveloped) [74:48-51] - Then intercession of intercessors will not benefit them. (48) So what has happened to them that they are turning away from the Reminder, (49) As if they were wild donkeys, (50)Fleeing from a lion? (51)

Posted by All Solutions Team
Labels: Self Surrender