At the Door of Brother

A+ A-
Print Email
At the Door of Brother

http://www.al-islam.org/anecdotes-reflection-part-1-sayyid-ali-akbar-sadaaqat/14-brotherhood#3-door-brother at the door of brother - at the door of Allah – Imam Muhammad Baqir (AS) - English
http://islamicblessings.com/upload/100%20Mouzo%20500%20Dastan%20Jild%201.pdf     p 91 - Urdu of Above
More Generous than Hatim
Hatim Tai was questioned: “Have you come across any one more generous than yourself?” He replied: “Yes, I have.” He was asked: “Where?” He said: “I had been travelling in the desert when I came across a tent. Inside it there was an old lady while behind the tent a goat lay tied. When the old lady saw me she approached me and held the reins of my horse so that I could dismount. A little later, her son arrived and was immensely pleased to have me as their guest. The old lady said to him: “Commence the preparations to entertain our guest. Go and slaughter the goat and prepare some food.”'
The son said: “First I shall go and collect some firewood,” but the old lady said: “Going to the desert and bringing the firewood shall consume a lot of time due to which our guest would have to remain hungry for long, and this would be contrary to social etiquette.”
So the son, breaking the only two lances that he possessed, slaughtered the goat, prepared the food and presented it before me.
When I investigated about their condition, I realized that the goat had been their only possession and despite this, they had slaughtered it for me.
I said to the old lady: “Do you recognize me?” When she replied in the negative, I said: “I am Hatim Tai. You must come with me to my tribe so that I can entertain you and shower you with gifts and presents!”
The old lady said: “Neither do we seek any reward from our guests nor do we sell bread for money, and she refused to accept anything from me.” Witnessing this generosity, I realized that they were far more generous and munificent than me.
http://www.al-islam.org/anecdotes-reflection-part-3-sayyid-ali-akbar-sadaaqat/48-generosity#2-more-generous-hatim
It is Forbidden to Hurt a Mu'min
Husain Ibn Abi al-A’laa narrates: I started out for Makkah in the company of twenty other persons. At every resting place, I would slaughter a goat, in order to provide the people with food. When I arrived in the presence of Imam Sadiq (a.s.), he said to me:
“O’ Husain! Woe be unto you that you hurt and cause inconvenience to the Mu'mineen.”
“I seek refuge in God from such an act,” I said.
He explained, “I have been informed that at every resting-place you used to slaughter a goat for your companions.”
“Yes, but By God, it was only for His happiness that I acted in this manner”.
The Imam (AS) continued, “Don’t you realize that amongst the group there were some, who desired to possess wealth so they too could perform good deeds like you, but not having the means, they have become upset.”
“I repent over my actions and resolve never to act in that way again,” I said.
The Imam (a.s.) advised, “A Mu'min, in the eyes of God, is more honourable than the angels, the mountains, the seven skies, the seven earths and everything that exists in them.”
http://www.al-islam.org/anecdotes-reflection-part-1-sayyid-ali-akbar-sadaaqat/12-harassment#3-it-forbidden-hurt-mumin 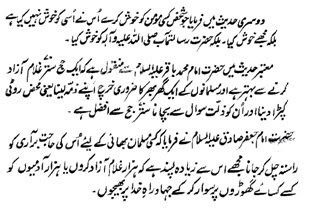 http://www.allsolutionsteam.com/2015/06/building-free-homes.html
Posted by All Solutions Team
Labels: At the Door of Brother