Education is the Best Service

A+ A-
Print Email
One day a lady came to Fatima (a.s.) said 'I have a weak old mother who does not know a few problems about her service (prayers). She has sent me towards you to question you (about them). Thus Fatima (a.s.) answered her (questions). And the number of her queries reached to ten and Fatima (a.s.) replied to all her questions. Then she (the woman got a shamed because of the high number of her questions. And said, 'Oh daughter of the Prophet (pbuh&hf), 'I do not put you to more inconvenience than this.' Fatima (a.s.) said, 'Ask me what you do not know. Have you ever seen a person who is one day hired to carry a heavy thing to the roof top from ground for an amount (equal to) a thousand dinnars (nearly a hundred thousand misqal (unit of weight) of gold) and he may feel himself tired.'
She said 'No'. Fatima (a.s.) said, 'I have been hired by Allah to get a wages which if the space between the earth and sky is filled up with pearls still (That wages) would he more than it for each of the questions I may answer you. Therefore, I deserve it that I must not feel tired exhausted.
http://www.duas.org/SyedaZehrasa.htm 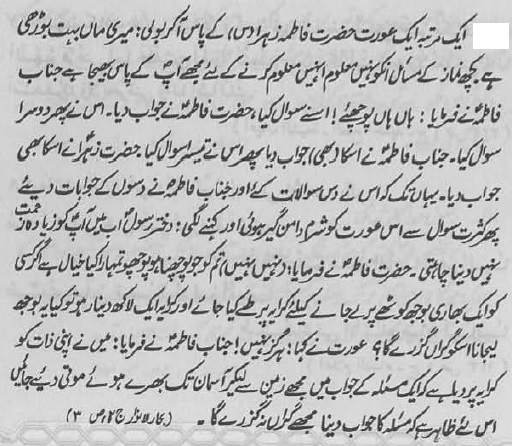 How a fake cheque of $500,000 helps a businessman
https://sites.google.com/site/positivethinkingclub/inspiring-stories/self-confidence
Posted by All Solutions Team
Labels: Education is the Best Service