A+ A-
Print Email
English and Urdu - Please Read:
Arba’een -- A brief write – up
When a Visitor to the Mausoleum of Imam Al Hussain (AHS) comes to visit the Imam (AHS) he represents all the people of his area -- his city, town, village and even his neighbourhood -- and presents their prayers, requests and pleadings to Imam Al Hussain (AHS) and when he returns home after completing his Visit, it becomes his responsibility as an Ambassador of the Holy Imam (AHS) to propagate the Teachings of the Holy Imam (AHS) in his area and spread the news of how he (AHS) and his (AHS) faithful Companions sacrificed their lives in establishing the Word of Allah, the Sunnah (Practice) of the Holy Prophet (PBUH & HP) and the Decree of Amr bi Al Ma’aroof (Enjoining Good) & Nahi’ an al Munkir (Prohibiting Evil).
The Holy Tomb of Hz. Ibn Aqeel, the Ambassador of Imam al Hussain (AHS) in the Mosque of Koofa even today refreshes the memories of Imam Al Hussain’s (AHS) great sacrifice.
Karbala : A Sacrifice, A Message!
Arba’een Pilgrimage to Iraq needs only Air – ticket as all other expenses like boarding / lodging and food etc. are borne with great magnanimity by the Iraqis without any qualms! This sacrificial and caring act of Iraqis is an additional attraction to be noticed. These limitless facilities offered to the Pilgrims without any cost or fee and absolutely free by the Iraqis is unique. Such an offering on the part of Iraqis can be considered as a Sacrifice on their part, for those Pilgrims who cannot afford to visit Iraq even once, because of their financial inability. The local citizenry plan among themselves to offer all facilities including Sponsorship etc. to deserving persons who are eager to visit Iraq but cannot do so for want of adequate finances.
Entrance to the Mausoleums:
Many Pilgrims are old, infirm, sick and too young to enter the Mausoleum by themselves and it is here that young Iraqis come forward wholeheartedly to help such Pilgrims to enter and touch & kiss the actual Tomb ‘s Enclosure of gold & silver. This again is a selfless devotion & love of these youngsters not just for Imam Al Hussain (AHS) but also for the Pilgrims of Imam Al Hussain (AHS)!
Due to the paucity of space between Karbala & Najaf and the huge multitude of Pilgrims thronging them, it becomes necessary to consider the rush & push of the crowd and at the same time take proper care & attention in entering the Sanctum Sanctorum of the Mausoleum with due respect & dignity to it and also to the Pilgrims themselves.
Prayers facilities at Najaf International Airport within the Check – in & Check – out & the Security Zone is more preferable & needed. This is what we noticed!
Due to tremendous construction activities in & around the Mausoleum of Karbala, the picture which normally a Pilgrim has in his mind of Karbala, has drastically changed & altered. For instance, the place where Tents of Imam Al Hussain (AHS) were erected, the hillock from where Bibi Zainab (AHS) hadwatched her brother being slaughtered which is known as  Tilla e Zainabia زينبيه تل and the place where Imam Al Hussain (AHS) was actually martyred, all appear to be  separate without any coherence. Toward the top side of the Tomb is the place of Imam Al Hussain’s (AHS) martyrdom called Place of Slaughter of Imam Hussain (AHS)احلسني قتل مقام in a Basement and there is a flight of steps that takes us down to it. There is also the Tomb of Habeeb Ibn Mazaher near the entrance to the Basement of Place of Slaughter of Imam Hussain (AHS) احلسني قتل مقام, while the Tomb of Hz. Ibraheem al Mujab son of the Seventh Holy Imam Moosa Al Kazim (AHS) is in the same hall as the Tomb of Hz. Habeeb Ibn Mazaher.

To circumambulate the Tomb, to kiss its Enclosure and to prostrate in front of it out of respect & devotion:
A person who all through his life had this wish to go on a Pilgrimage to Karbala and to kiss the Tomb of Imam Al Hussain (AHS) and to place his forehead on the ground near the head – side of the Enclosure out of sheer love & devotion is unable to do so because of the massive gathering of Pilgrims like him, all around the Enclosure and once caught in the whirlpool of people around the Enclosure, it becomes well – nigh impossible to come out of the Hall of the Tomb except by sheer miracle and many people thus do not get a chance to either kiss the Enclosure or to even offer a Prostration near it! Quite a few people also get injured in the process, as I got!
This is because of the multitude within the Hall of the Enclosure that a person is not able to see or be aware that there are people who are prostrating and it only when such persons fall down on those prostrating that he becomes aware and consequently many people in this melee get injured. But still, never saw any person getting angry over others or got dismooded, for all know that every Pilgrim has come with true love & devotion for Imam Al Hussain (AHS) and it is this fervor and sheer ecstasy of joy that they are within the Tomb Enclosure of the Holy Imam (AHS) which makes them oblivious to all such negative feelings! Shia’a T.V. Channels in this connection can do a yeoman service in that they can guide the crowd of Pilgrims in entering / exiting from the Hall of Enclosure and thus avoid any accident or injury due to over – crowding.
Then there is the question of health & hygiene of the City which indeed are exemplary but during rainy season it becomes difficult for upkeep of the environment, and during the winter season which is pretty severe. Many Pilgrims sleep outdoors on footpaths etc. This phenomenon may be noticed with sadness.
Najaf – Karbala, Basra – Karbala, Baghdad – Karbala exemplary show of sincere devotion & love of the Local Citizens toward Visiting Pilgrims:
There are ample scenes of devotion, sacrifice, love and attachment to Imam Al Hussain (AHS) which every individual Iraqi has in his heart and which can be witnessed all along these routes, and which presents itself in the form of selfless service the Iraqis do for the Pilgrims coming from different lands and from all over the globe in that they provide food, shelter, even physiotherapy and other medical facilities, all absolutely free of cost to every Pilgrim whether going by walk or by car to Karbala!
These loving & caring Iraqis save whatever they can in a year, and then spend their hard – earned money on these lavish services to the Pilgrims of their beloved Imam Al Hussain (AHS)!
Nowadays, big huge Mosques/Centres have been built all along the entire route from Basra, Najaf, Baghdad to Karbala which accommodate these weary Pilgrims on –foot for their rest & comfort, in addition to Camps which provide all facilities like food, shelter, bed and washrooms!
Another aspect of Arba’een Pilgrimage to the Mausoleum of Imam Al Hussain (AHS) is that when a person comes from a faraway land tired and hungry and then enters the huge Courtyard of the Mausoleum along with hundreds and thousands of Co – Pilgrims and then with unison all join together and in one voice they call Labbaik Ya Hussain, ya Hussain I am here for you, he feels an ethereal feeling of oneness with all the congregation and a warmth & an attachment to the Leader of the Martyrs that he cannot but help think of that One Day in the History of Mankind --A’ashoora and his sense of belonging to his beloved Imam Al Hussain (AHS)! 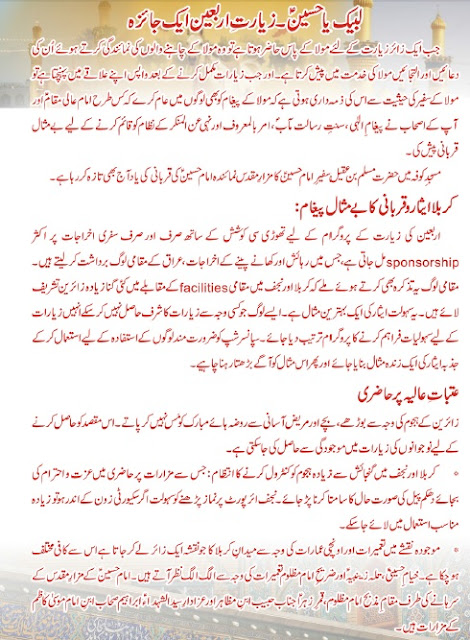 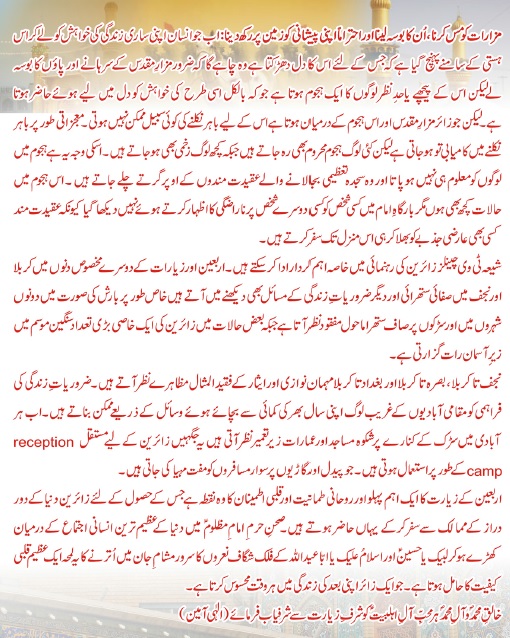 The following 5-munite youtube link is to simply make you realize that the massive annual march is an unprecedented and most meaningful movement in the history of the world.  March to Karbala-Iraq is 'love and faith' . . . 'wisdom & compassion.'  Labbayk Ya Husayn: I am standing in thy service Ya Husayn.

It's not the annual Muslim Hajj (Makkah-KSA) or the Hindu Kumbh Mela (every 10 years at Allahabad-UP-India), it's known as ARBA'EEN . . . World's Largest Annual March and many of you've probably never heard of it!

This year on December 2, 2015, between 25-30 million people (Muslims, Hindus, Christians . . . men, women, children of all walks of life) walked for many many miles from Najaf to Karbala-Iraq to pay respect to the supreme sacrifices by the Prince of Martyrs Imam Husayn ibn Ali (a s), grandson of Prophet Muhammad (s.a.a.w.) to save not just a religion but humanity.      https://youtu.be/lgnEtaAEx24 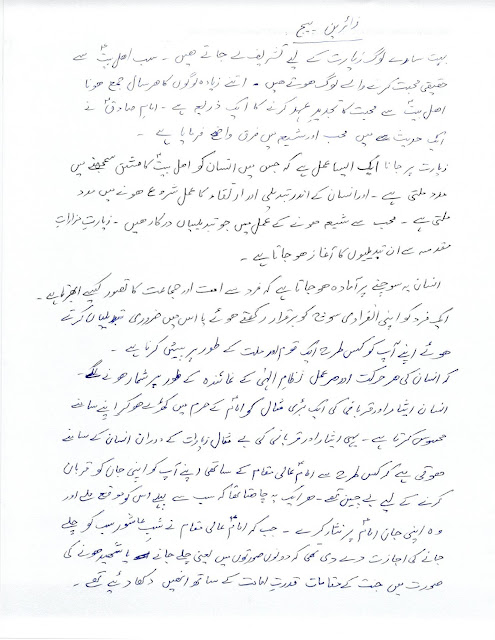